God wants everybody to become his child.

PEACE AND UNITY IS POSSIBLE !

But against Gods will mankind is not living in unity and as we all can see mankind and the whole planet is in very bad condition.

It is time to do a change !

God gave Bishop Ralph Napierski a vision and the mission to work for that unity.

God wants all christians to be ONE.
But against Gods will, the christians are not living this unity yet.

And the second part is about the unity of mankind in christ consciousness.
God gave me a vision:

I saw how all christians come into unity under the cross of Jesus Christ.
Christians of all denominations come together under the cross to pray for Unity.
They experience unity and their hearts find together.
A consciousness of unity is manifesting.

I saw all Christians united under the cross.
All christians are one body: The body of Christ.

"So in Christ we who are many form one body, and each member belongs to all the others." Roman 12,5

This body belongs to God. It is Gods body = Corpus Dei (Latin).
We belong to God and he wants us all to be ONE and that we work together.
God wants that his body grows in LOVE:

The body "grows and builds itself up in love, as each part does its work." Eph 4,16

All Christians are in Unity.
And then the fire of the Holy Spirit comes down.
A new Pentecost.

"And when the day of Pentecost was fully come, they were all with one accord in one place. 2 And suddenly there came a sound from heaven as of a rushing mighty wind, and it filled all the house where they were sitting. 3 And there appeared unto them cloven tongues like as of fire, and it sat upon each of them. 4 And they were all filled with the Holy Ghost." Acts 2,1-4

Details are explained here in the PDF broshure about the Unity unter the true cross: 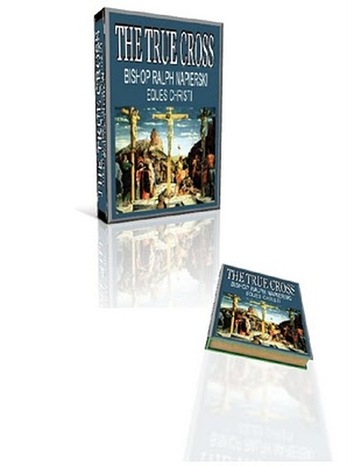 And God showed me also how they all will be in one place and come into one accord, what this realy means and the new Pentecost is not the final goal but the beginning of what will happen next.

We will be "speaking the truth in love, we will in all things grow up into him who is the Head, that is, Christ. From him the whole body, joined and held together by every supporting ligament, grows and builds itself up in love," Eph 4,16

"until we all reach unity in the faith and in the knowledge of the Son of God "
Eph 4,13

And then all will enter the consciousness of the head who is Christ. 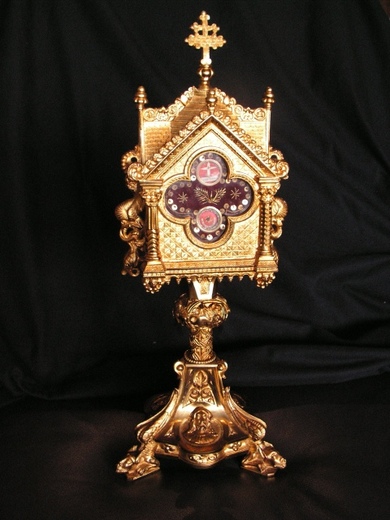 The monstrance contains parts of the true cross.

The cross on which Jesus Christ has been crucified on.
It beginns with the decission for the unity.
This decission to follow Gods will has to be made by each of us ourselves.
This is the first unity: The unity of the decission for unity.

Now we are called to come together at one place: Under the cross.
With this physical unity we start to manifest the process of unity.
But we can not perform the complete unity by ourselves.

We need the grace of God to overcome the divisions, conflicts and our different opinions about the truth.

The place where this grace of God is given as a gift, is under the cross on which Jesus Christ has given himself as the sacrifice for the salvation of mankind.

And this way after the physical unity and the unity in the decission for unity, there follows the unity in asking God to build up the complete unity between us.

In the worship of God that we do together, we find to the unity of hearts.

We will grow in love and Gods answer to to our prayers for unity will be the pouring out of the Holy Spirit.

The Holy Spirit leads us into the unity of the faith and the realization of God.

All theological conflicts will be erased through the gift of unity in faith and realization.

Until we all become ONE in and with Jesus and we all are in Christ Consciousness. 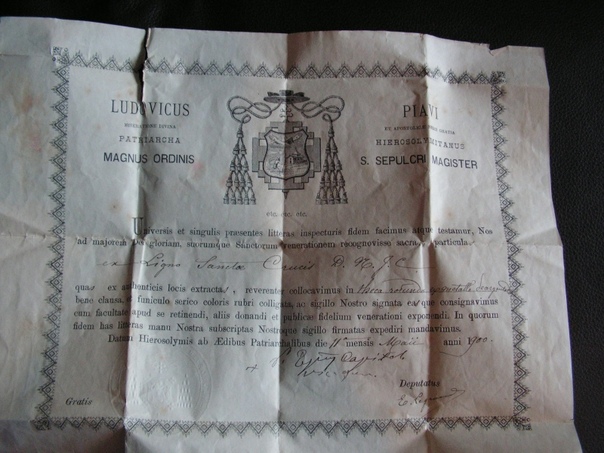 Here you can see the certificate of authenticity COA of the True Cross relics, issued by the Latin Patriarch of Jerusalem Luigi Piavi, the Grand Master of the Knights of the Tomb OESSH. 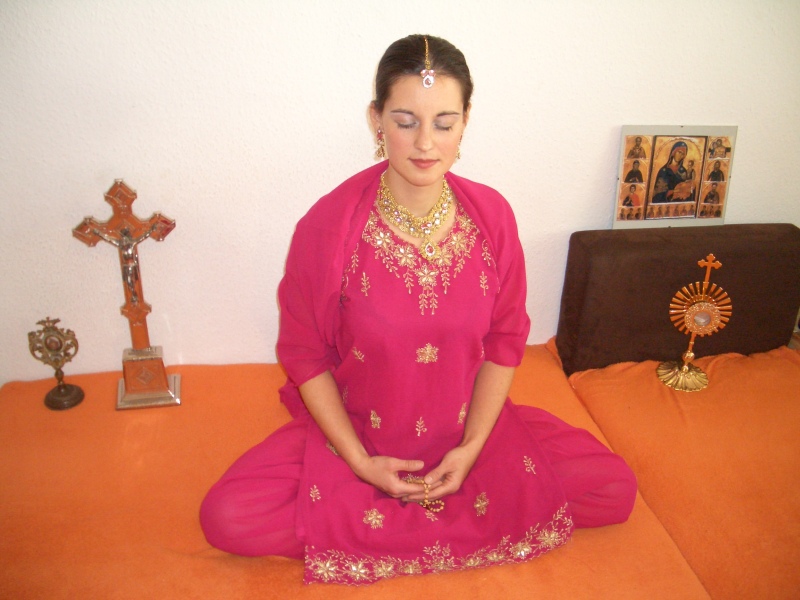 The Christ Consciousness will expand and every human beeing is invited to join this new consciousness and come into unity.

Limitations and borders of nationality and race are already broken.

Now it is time to break the borders of the belief systems and find unity in the new consciousness.

A great Premavatar of the Hindus was sent out by God and made a huge step to bring unity between Hindus and Christians: Paramahamsa Yogananda.

Yogananda already walked the half way and declared that the unity will happen in Christ Consciousness.

What an amazing step he took and great change he prepared for mankind!

He built the one half of the bridge already!

It took a while until I understood that all my arguments that I had against the teachings of Yogananda are in fact the parts of the bridge that is build by Christianity.

And when I finaly had all arguments "against" Yogananda together I had build up the missing part of the bridge.

And then I was ready to meet him. But he did already leave this planet in 1952. I was sad about this but I became aware that already millions are walking on the side of the bridge that Yoganada did build up with his teachings and techniques.

I became aware of a huge movement for unity that is already growing.

1986 Pope John Paul II invited leaders of all religions for starting a movement into unity. And they all prayed for it.

A very active worker for the unity is the Dalai Lama who of course prayed already at the first meeting in 1986.

The Dalai Lama already walked up the estaern part of the bridge and is already standing on the top of the bridge together with some Hindu leaders and they are waiting for others to join them.

The Dalai Lama did set amzing signs and initiated alot of processes to help others to come into the unity of Christ Consciousness.

The Dalai Lama was attending Catholic Mass at St Stephen's Cathedral in Vienna, Austria, on May 27, 2012 this was the rememberance day of the first Pentecost!

What an amazing sign for those who are about to walk up the bridge!

The unity will happen in Christ Consciousness as it was shown through the teachings and revelations of Paramahansa Yogananda and the actions of the Dalai Lama who celebrated Pentecost in a Catholic Mass.

And this unity will make for everybody available the gifts that each part is bringing into the unity.

"For as lightning that comes from the east is visible even in the west, so will be the coming of the Son of Man"
Matthew 24,27

This is what the Jesus Yoga is about:

"Jesus answered, I am the way and the truth and the life. No-one comes to the Father except through me."
John 14,6

Way referes to Yoga
Truth referes to Enlightenment
Life referes to Salvation
Coming to the Father referes to the Unity
And all this through Jesus.

Let us all meet in Christ Consciousness and become one with eachother and with God ! 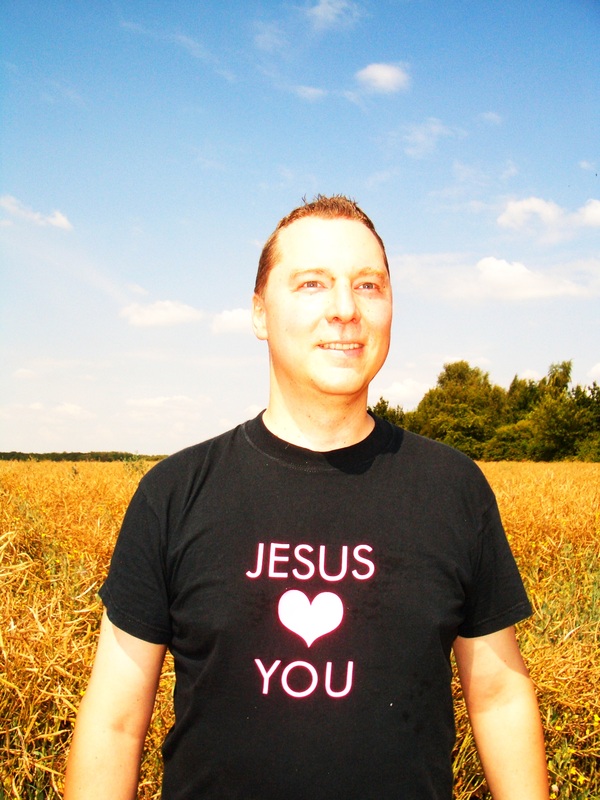 Create your own unique website with customizable templates.
Jesus Yoga